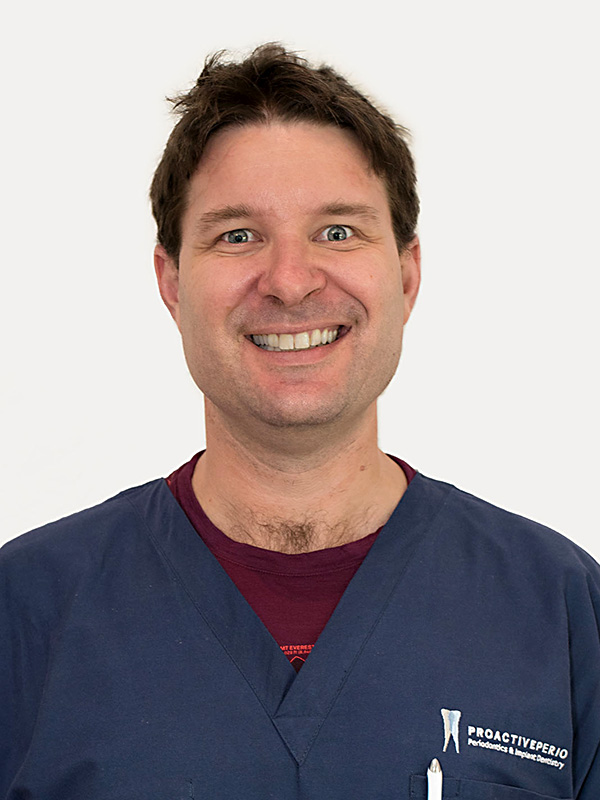 Dr Chris Barker is a Queensland-based periodontist who specialises in the full scope of specialist periodontics treatment methods.

He is passionate about staying up to date with new treatments and technologies that assist in providing positive patient outcomes and experiences. Chris is one of only a few specialists’ periodontists in Australia able to provide LANAP® – a minimally invasive laser periodontal treatment. His practice, Proactive Perio, offers Guided Biofilm Therapy (GBT) which is one of the latest technologies in dental hygiene treatments.

He graduated from dental school at the University of Adelaide in 2004 and was awarded First Class Honours for completion of an honours research program in 2005. He completed his Doctorate in Clinical Dentistry, specialising in Periodontology, at Griffith University in 2014. He is a fellow of the Royal Australasian College of Dental Surgeons and has completed the Long Surgical Course Certified from the International Team for Implantology (ITI).

Chris has been a junior lecturer and clinical tutor at the University of Adelaide and Griffith University. He is also a published author and his research on modifying factors of bone resorption and bone production has been presented at domestic and international conferences. He received research grants from the Australian Periodontology Research Foundation and the Australian Society of Orthodontics.

He was also recently appointed to launch the public awareness campaign, ‘Fight Gum Disease Australia’, and held its inaugural launch in February 2020.

Before setting up his practice, Chris worked in government and private practice roles in Adelaide, Brisbane and regional Queensland. He still frequently travels to regional Queensland to provide periodontal treatment to patients living in rural and remote areas.

Chris lives in Brisbane with his wife Wendy, and they have three young children. He enjoys getting outdoors and has a keen interest in rugby and mountain trekking.